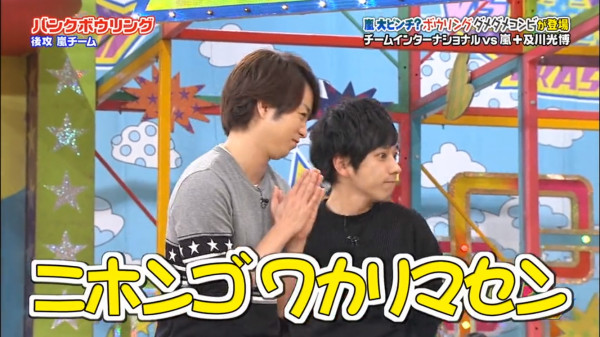 As Ninomiya said on Vs Arashi back in March of this year, "Nihongo Wakarimasen". And this was to be my first hurdle in becoming a full-time, fangirling, Arashian. I didn't understand Japanese!

When I started watching Vs Arashi on SBS Television, I had subtitles to help me. It's hard to explain but back then I just took it for granted that I understood what they were saying because watching subtitles was second nature to me. I am a lover of foreign films from France, Germany, Spain, Japan, and Korea. But when I branched out and started watching and listening to Arashi's music/pvs and live concert DVDs, I came undone. Suddenly I had no subtitles to help me! Why did I stick with it and become obsessed anyway? That's a good question. I will get to that in a minute (I hope).

When I was a teenager my cousin of the same age was learning Japanese at school. I had a long background with French and a year of Italian so when she kept speaking to me in Japanese, I was actually jealous she knew such a pretty language. Later in life, two of my most significant partners were both interested in all things Japanese. The first grew up learning Karate and Taekwondo and when we were together we slept on a futon mattress. The second grew up learning Jujutsu and was obsessed with Japanese anime and manga. So when you think about it, it's really no accident that I fell into the Arashi fandom. I had already been well trained and well prepared haha

In all seriousness though, I have honed, crafted and nurtured my very own deep and special love of Japan and the Japanese language through watching doramas and movies. As I have had fifteen plus years of Arashi to catch up on, I have had a mighty long list of shows to watch - for each member! I still have a long way to go but so far I have watched Aiba, MatsuJun, Ninomiya, Ohno and Sakurai shine beguilingly on my television screen (All thanks to lovely people who are kind and patient enough to subtitle them all). My growing love and interest has even expanded to non-Arashi Japanese actors, and subsequently it's been months since I watched an English-speaking movie! I can't fully explain it but my all-consuming love for Japan and the Japanese culture really blossomed out of watching Arashi members' doramas and movies.

Learning Japanese hasn't come easy to me, and as far as fluent conversational Japanese goes I am still very much lost. I have picked up many keywords and phrases this past two years though. Some however have been quite funny and I have had many silly laughs with one of my Arashian friends. Take for example this little anecdote: The song Troublemaker. When I first heard Arashi sing "sweet" in the chorus, to me it sounded like "sui-suicide" so that has become an in-joke between us which has stuck. The other word is "saikou" which means the best. To my English speaking mind, I thought they were saying psycho hahahaha

My daughter is currently in her third year of learning Japanese at school and she is incredibly astute at it. In her year and her class she is the top student for hiragana and katakana, and this year she even took on Kanji which is the hardest writing system to learn. But will she teach me basic Japanese? No way! I have even tried to bribe her with gifts of her favourite anime characters but she still won't budge. She's funny though, she quickly corrects me if I pronounce anything wrong hahaha

In the meantime, I will continue my journey of watching Japanese doramas and movies. Next time I will write an individual post for each Arashi member's doramas and movies that I've watched so far. I will do it in AMNOS order to be fair because the temptation will be to write reams and reams about Nino's accomplishments, and really...who would want that? ;)