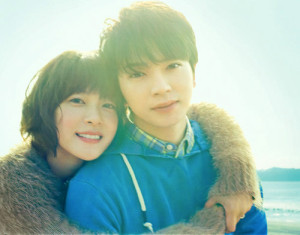 The first time I saw Matsumoto Jun's solo acting was when I watched Girl in the Sunny Place (Hidamari no Kanojo). I had many Arashian friends suggesting I start with Hana Yori Dango but I'm never one to go with popular demand, so I went with the less "mainstream" choice. Again, I bought the DVD so when it came I watched it within minutes of its arrival to my door.

To be honest, I am so glad I went with this movie as my first choice. I had seen MatsuJun acting in the Pikanchi movies, and I confess I was less enthusiastic about his acting than the other members (and I mean absolutely no disrespect to MatsuJun or his fans when I say that). I can't properly describe how I felt about his acting in the early days, but I can assure you my opinion has changed since then. To me MatsuJun is a show-man first and foremost, and I think he is an entertainer and concert organiser to a fault.

His role as Okuda in Hidamari no Kanojo was really beautiful, raw and honest. It was the perfect start for me to discern MatsuJun's solo acting ability. The next drama I watched him in was Shitsuren Chocolatier and his role as Sota Koyurugi was actually quite enjoyable despite the negative reactions I'd read. I also fell in love with Ishihara Satomi who I saw for the first time. It was great to see some actors I was starting to grow familiar with, such as Takenaka Naoto and Arimura Kasumi. Then along came Hana Yori Dango, or HanaDan as it is known in the Arashi fandom.

I will admit here and now that I loved this series, and I have since watched both series' and the special movie. MatsuJun was crazy perfect as Domyoji. He just suited the bratty role and I laughed and cried my way through it all. I can see why so many of my Arashi friends were "Jun baited" and/or have been Arashi fans since that era. He was amazing, I will admit. Yes, he made me angry and I rolled my eyes at his sulking, selfish ways but that was the whole point of the role, and MatsuJun certainly perfected it!

I have also seen the following MatsuJun doramas and movies - so far:

In the very near future, I want to watch Lucky Seven, Toyko Tower and I'm also really looking forward to his new movie in 2017, Narratage.