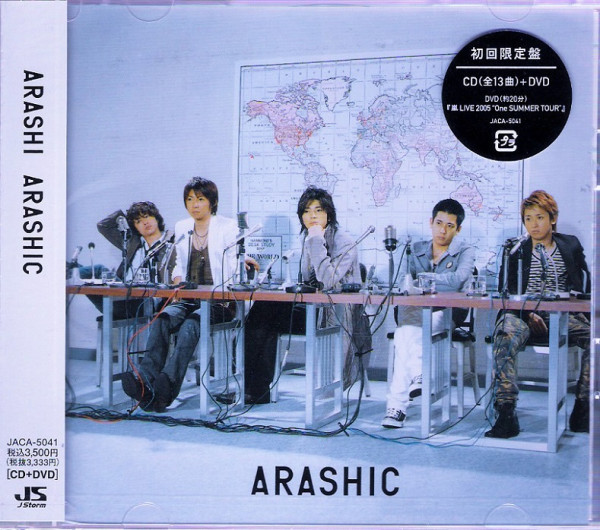 It is a cold, very wet winter's day here today but it just came to my attention that ARASHIC was released on this day, in 2006. So, I thought I would write up a quick anniversary post to warm myself up a little. This album was arguably the turning point in Arashi's popularity, the year Hana Yori Dango made their success raise a few notches, Many fans were "Jun-baited" thanks to Hanadan. I really wish I had known Arashi back then, but I didn't come to know about them until seven years later........ *sob*

For this post I will just acknowledge the playlist, and the album itself which, according to wikipedia, was released not only in Japan but also in Hong Kong, Taiwan, Thailand and South Korea. This was the first Arashi album to gain sales (and attention) outside of Japan and within the next 12 months they would go on to tour other Asian countries for the first time. Also around this time period, Nino went overseas to star in Clint Eastwood's movie Letters from Iwo Jima. Who knew that this epic year would bring the winds of change their way, and that their lives would change so dramatically to bring us a further wonderful 13 years worth of music, movies, dramas, variety shows and five-dome concerts!! (Is it any wonder they need a break? *justsaying*)

Anyway, the playlist: my favourite songs on this album would have to be Cool & Soul, I Want Somebody, and Runaway Train. I also really like Caramel Song, and Ready to Fly. On the regular edition there was a bonus track, Love Parade. This song is beautiful as a stand-alone time piece, I always envision a smoky underground jazz bar and they are standing on a tiny stage in suits with canes in hand Fred Astaire style.... Sorry, my imaginaton ran away with me just then.

Happy Anniversary ARASHIC; and thank you for giving us such memorable concert songs like Wish, Kitto, and not forgetting Carnival Night Part II. (And Cool & Soul at ARAFES '13 omgggggg *doki doki*)