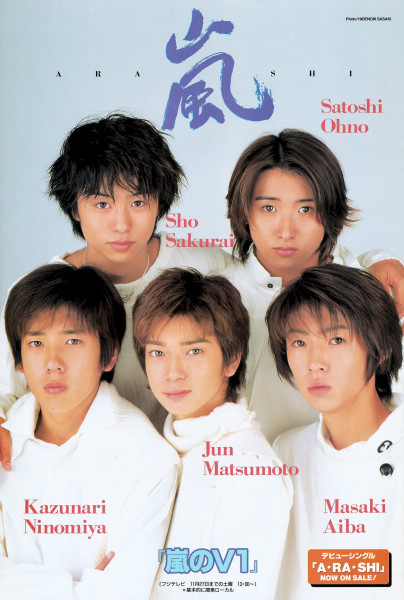 November 2
I am writing up the first part of this post on the eve of their 20th birthday celebrations and I'm a nervous wreck to say the least. This is the eve of a bigger-than-goliath occasion. The eve of their YouTube livestream, the eve of their introduction into the big wide world of SNS ~ already my Twitter timeline is brighter than E.T's finger phoning home, with talk of new accounts opening left, right and centre and I'm happy about it but I am also goddamn apprehensive. For twenty years, Arashi have been virtually hidden from the world, available to nobody but the Japanese. Now, twenty years later, they are slowly but surely opening themselves up to the world (even though us clever Arashians have opened ourselves to them for years now haha). I do want them to enjoy a more worldwide audience, of course I want that, but at the same time I've been enjoying my little illegal, underground, secret, hidden Arashi bubble. Please don't burst my bubble now with all these new accounts: Youtube,Twitter, TikTok, Weibo, Insta........ ARGHHH! SLOW DOWNNN ARASHI MINNA SAAAAN!

Okay, but *cough* the A.RA,SHI anniversary/birthday/celebrations. Twenty years since they blew up a storm (pardon the pun) on the television screens of Japan, wearing those now iconic transparent suits with white shorts underneath (but with bare chests that made their way into our hearts and minds). I only discovered them five years ago but what a wild ride it has been for me in that short time. I have had to cram twenty years worth of content into those five years and I still have a long way to go before I catch up. That is part of the reason why I've decided to horde as many Shiyagare and VSA episodes as I can, so that I can watch them all during their break..... Okay, I will stop here and write the rest tomorrow, after the YT livestream.


POSTSCRIPT: November 3
It has been just over an hour and a half since the YouTube livestream ended and I am still shaking. I was an absolute wreck in the lead up to the press con, it was and still is such a surreal moment to actually see Arashi officially online (and I could watch it without guilt or having to hide away!). I don't really know what else to add to this post now to be honest, I guess I am feeling the anti-climax after all the hype, nerves and excitement. But I am absolutely thrilled to pieces for Arashi, and for the new single "Turning Up" which will air live tonight at 8:00pm JST.