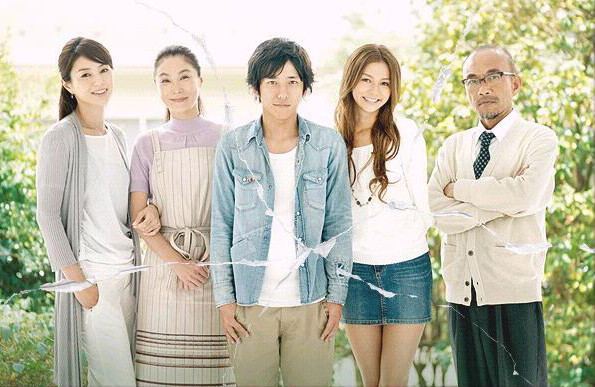 My first Ninomiya dorama was Freeter ie o Kau and it was a rollercoaster ride of emotions. I was totally new to Japanese doramas and this was the first one I watched out of all the Aashi members doramas. I laughed but mostly I cried, and Nino's acting ability sent me into a tailspin. From this moment onwards, I was hooked on Japanese dramas, Arashi and Nino (not necessarily in that order) haha.

The relationship between mother and son, as portrayed by Asano Atsuko and Nino was breath-taking. I really believed that I was watching their day-to-day, real-life unfold before my eyes. I was completely drawn in to the Take household, and the emotional realm of Seiji. I didn't want the drama to end to be honest so imagine how happy I was when I discovered there was an SP made!

I had seen Nino's acting for the first time in GANTZ so I already knew that he was an amazing actor. I know I might sound biased as he is my Arashi ichiban, but his acting has blown me away every single time I watch him, and more and more with each new dorama and movie role that he takes on. He gives his heart and soul to the whole craft of acting and I read an interview with him somewhere that the reason he does is because he does it for Arashi, but I also believe he does it for us. That and the fact that he is a natural on-screen.

Honestly, I could wax lyrical about Nino's acting. It would be a couple of volumes worth, novel sized. To be fair to the other members, and to my readers, I won't. I will say though, that of all the Arashi members Nino has moved me the most to heights of sheer joy to the low and pits of despair. His facial expressions, his body language, his tone of voice, and his ease of emotions on-screen make him a rare gem in the acting world. It is no small wonder he was pegged for Hollywood but I am sincerely glad he stayed with his feet firmly in Japan. I honour and respect him in every way for making that choice. Japan is very lucky indeed! And I will shut up now haha

I have also seen the following Ninomiya doramas and movies - so far:

Oh, and not forgetting his small but memorable appearances in Ohno's drama, Maou (*ughhhh*) and MatsuJun's drama, NatsuNiji.

In the very near future I would really like to see Nino in Akimahende, Abunai Hokago, Marathon, and I'm really looking forward to next year's release of The Last Recipe.