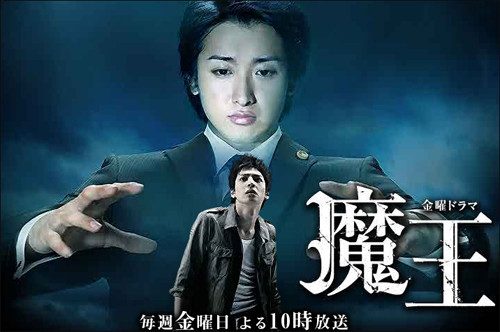 The first Ohno dorama I watched was Maou, and so far this is my most re-watched Arashi members' drama. Ohno was mesmerizing to watch in this and I admit that it set a very high bar for any future dramas I've seen him in. When I watched Maou for the first time I watched it with a dear friend and fellow Arashian. We found a subbed version of Maou on YouTube so we set up an agreed viewing time and hit the play button at the same time (She in the Philippines and me in Australia)!

This was also my first introduction to Ikuta Toma, and I am very glad I saw him in this first. By the end of the series my friend and I were making in-jokes about his many running and screaming scenes but this was in no way to disrespect Ikuta as a person or as an actor. He is a very talented actor and I have purposely gone back through his filmography and watched many of his dramas and films. Anywayyyyy, back to Ohno...

I love Ohno's enigmatic acting style. He doesn't seem like he would take acting seriously but as soon as you put a camera to his face and give him a script he comes alive. I really loved watching his character transformations in Maou, but also episode four of Kaibutsu kun is forever imprinted in my memory. When he cried on-screen I was full-on sobbing right along with him, it was that believable. The second dorama I watched Ohno in was Shinigami Kun which I bought on DVD. This was my first introduction to the other side of his on-screen quirkiness (and my first introduction to other fabulous actors, Masaki Suda and Kiritani Mirei).

I have also seen the following Ohno doramas and movies - so far:

In the very near future I would still very much like to see Ohno in Uta no Onii-san. Next year we will see Ohno in the much anticipated movie, Shinobi no Kuni. Most of my Arashian friends and followers are more alight talking about this movie, more so than Narratage and The Last Recipe combined. Perhaps because we will get to see Ohno as a full-fledged NINJA! *kyaaaaaaaaaa*