I am thoroughly at a loss for something to occupy my current worrying mind and as I'm still waiting for my Arashi con DVDs to be delivered, I thought I would write a blog post using a series of questions posed by

tabunhappy on Twitter recently. I meant to answer her tweet that day but then had the idea to use it for a future post here instead. I hope she doesn't mind ;) 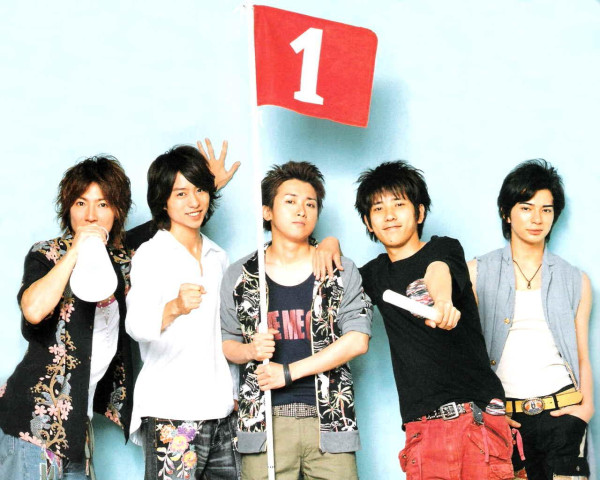 Q1. First Arashi song you listened to
The first song my daughter fully introduced me to was Wild At Heart but then she played Bittersweet and I was drawn in to the world of Arashi from that song onwards. It remains my number one Arashi song to this day. It will forever have a special place in my heart.

Q2. First drama you watched
I was immediately drawn to Ninomiya's acting. I had seen him many years prior in Letters From Iwo Jima but he didn't register to me then as being anything beyond an Asian in a Hollywood movie (no offence meant). I did not associate him with being Saigo when I watched him a few years later in GANTZ, nor did I even know then that he was a Japanese idol. That wasn't until 2014 when my daughter told me about Arashi - the idol group. Then I strode into the world of jdramas and the first I watched was Ryusei no Kizuna.

Q3. First con (that you watched, if you have attended any you can also include it)
I wish I could say I have attended a con but only in my dreams and in my daydreaming mind. I am saving up hard to go to Japan one day and if that includes a con, my life will be made all the more richer for the experience. However, until then, I content myself with my DVD collection. The first con I watched was LOVE. I have already written a post here about that life-changing experience.

Q4. First album that you listened to
The first album I bought was The Digitalian because it included Bittersweet. Ahhh, my first listen of that album will forever be a beacon that leads me back to Arashi, when I am feeling down or disheartened for any reason.

Q5. First tv regular show you watched
Easy answer! Vs Arashi because it airs here on SBS2 Television (now known as SBS VICELAND). I first saw this program in 2012 but I didn't even register for two whole years that they were popular idols in Japan. I must've been in my kpop zone then until my daughter put me straight! haha

Q6. First PV you watched
This relates to my answer for question one. The first song and PV that my daughter showed me was Wild At Heart but I gulped and drooled heavily upon seeing the Bittersweet PV. "You have my attention Rose!" (quote from Titanic, the movie)

Q7. First movie you watched
Aside from the three movies I had previously seen Ninomiya in? Once again I have to credit my daughter for this answer. We watched the first two Pikanchi movies together (which on first viewing I have to admit I didn't enjoy them at all - that "uninitiated" opinion has since changed, trust me) and then we later watched Saigo no Yakusoku together which shows each of them in an entirely different light altogether. I was most impressed with this movie and have since watched it several times.

Q8. First impressions of the guys
💚Aiba ~ The very first impression I had of him was happy, always enthusiastic and optimistic in any situation, and never one to be serious or downhearted. Somebody who can instantly liven up a room filled with serious people.
💜MatsuJun ~ When I first saw him on Vs Arashi I thought he was passionate, extremely earnest and didn't suffer fools very well. When I first watched him in concert mode, I thought he was showing off too much!
💛Ninomiya ~ I knew this guy would steal my heart from the get-go; funny, cheeky, spirited, charming, and passionate with his gorgeous eyes and smile. Who can resist him? He's a Gemini!
💙Ohno ~ The very first impression I had of him was serious but with just the perfect injected dose of humour that he can easily throw you off guard. I also thought (at first) that he was everybody's (the other members) lapdog.
❤️Sakurai ~ I honestly thought he was the group's Leader and was quite shocked to discover that Ohno is. He has the ability to emcee without fault and he can command an audience just with his voice. I was not at all surprised to learn he is a University graduate and a journalist.